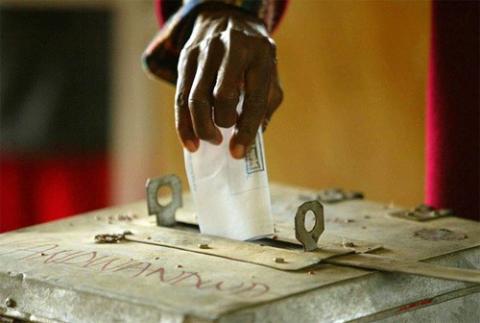 A year full of elections

In 2016 many countries in Africa will hold elections for new parliaments or heads of state. Will they interfere with the positive economic outlook for the continent?

A particularly dense election schedule will dominate in 2016 political affairs on the African continent. The Central African Republic will make the beginning. Tomorrow, on 30 December, will take place the first round of the presidential elections, nearly three years after the fall of then President François Bozizé. On 31 January will take place the second round in this civil war torn country. Elections had to be postponed from 18 October 2015 due to violence and instability. Acting interim President Catherine Samba-Panza, one of the rare women at the head of an African state, is not allowed to be a candidate.

Will Uganda’s president Yoweri Museveni be elected in February for a fifth mandate? However, he will have to run against his former personal doctor Kizza Besigye and his former Prime Minister Amama Mbabazi.

In Niger, the head of state Mahamadou Issoufou will run for presidency in February too. In 2011, he won the first round with 36% of the votes against Seyni Oumarou who got 23%. In the second round, nearly 58% of Nigerien voters chose Issoufou, an ethnic Hausa who live in the south of the country near the border to Nigeria.

In Benin a former investment banker, Lionel Zinsou, has some chances to become president of the small country next to Nigeria too. The capital Cotonou has economic importance for the whole region thanks to its seaport, its international airport and the Sémé off shore oil field with estimated reserves of 44 million barrels.

Zinsou, born in 1953 in Paris of a Beninese father, is well known in France for having been a partner in bankers Rothschild before joining the investment fund PAI Partners in 2008. In June 2015 he moved to Benin when President Yayi Boni appointed Zinsou as Prime Minister. Boni will be probably pleased to see Zinsou as his successor as he himself is barred after this second term from seeking re-election. Zinsou will have to face Patrice Talon, a Beninese businessman who had some success in farming and cotton. He is also the majority owner of the hotel group Novotel Benin. He was supporting Yayi during the elections in 2006 when he ran the first time for presidency, but in 2011 Talon felt in disgrace.

The municipal elections in South Africa to be held between 18 May and 16 August will be given some international attention as the main opposition party Democratic Alliance has chances to take Nelson Mandela Bay Metropolitan Municipality with its most important town Port Elizabeth over from the ruling party ANC.

Last but not least, the current President of Ghana John Dramani Mahama will have to confront in December Nana Akufo-Addo as he did in 2012. Mahama, then Vice President, took office in July 2012 following the death of his predecessor, John Atta Mills. In December 2012, he was elected President with 50.7% of the votes and a small 3% winning margin against his rival, Akufo-Addo. Now, Akufo-Addo, a renowned lawyer who was working three years in France at a US law firm, will be looking for a second chance. Under President John Kufuor he was appointed after the December 2000 elections Minister of Justice and Attorney General. In 2007, Akufo-Addo resigned from the Kufuor government to run for the presidential elections in 2008.

The big question will be what will happen in 2016 in the DR Congo. According to the law, the current President Joseph Kabila, who took office after his father’s death in 2001, cannot run for another term in the elections due to be held in November. In some countries the constitution has been changed in order to allow to the current Presidents a third term. This happened for instance in Rwanda on 18 December 2015 allowing Paul Kagame to extend his rule beyond a second term that ends in 2017.

It will be more difficult for Kabila to change the constitution. Therefore, he might be tempted to stall for time. Government officials said that a national census could be held… which would postpone elections for two or even four years.

In 2015, African economy withstood globally to the falling prices for oil, gas, metals and food. This resistance to a less favourable international environment proved how much the economic upswing on the continent has become self-supporting. In 2016, African politicians and voters will have to prove that political elections will not affect the overall positive outlook for the continent’s economy.