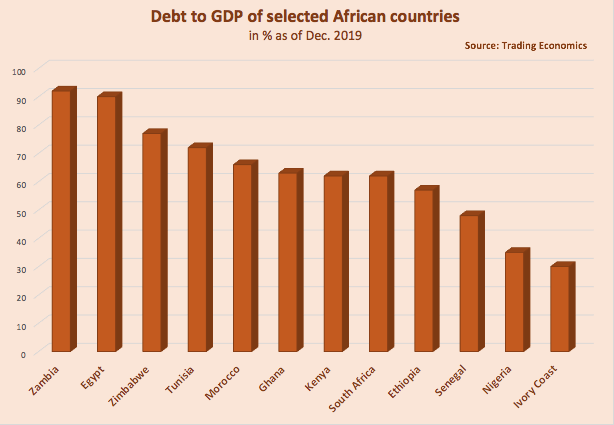 A debt crisis in Africa? Difficulties yes, but not a crisis

Zambia, Ethiopia and some other countries are having difficulty servicing their debts. Some observers deduce a new debt crisis for Africa from this. The situation is worrisome, but Africa is far from a new debt disaster.

It is true: Some African governments are struggling to finance the fight against the covid-19 pandemic and service the debts they made before. But this situation is not only due to the spread of the virus. Even before in 2016, Angola spent nearly six times as much servicing its external debt as it did on public health care.

The tensions bring back memories of the 1980s. Some observers deduce from these difficulties that Africa is facing a new debt crisis. It is the debt in Zambia, Chad and Ethiopia that is of greatest concern in the West. Their debt to GDP ratios are at 92% for Zambia, at 44% for Chad and at 57% for Ethiopia. All figures refer to the end of 2019. And yet the creditors are worried. Even at these levels these countries are struggling to service their debt.

Some countries are still performing well

We agree that the situation is worrisome. But the situation is nowhere near as bad as the great debt crisis that Africa got into 40 years ago. In 1995, the ratio of the external debt to GDP was in Africa at a worrying level of 117%. Now, only three countries suffer from a debt to GDP ratio above 100%. Cape Verde reached 125% at the end of 2019, Angola 111% and Mozambique 109%.

Some economically well-performing countries have debt ratios that are better than in most European countries. In Senegal, the debt ratio is at just 48% and in Nigeria at 35%. Kenya, South Africa and Ghana are at 62 and 63% and Ivory Coast at 30%.

The situation today is a far cry from the great debt crisis that plunged Africa into a major crisis in the early 1980s. Four major events were leading to the debt crisis then:

The reasons of the debt stress are different

The current situation is worrisome, but the reasons for the difficulties today are completely different from the 1980s:

We are in favour of creditors approaching African debtors and accepting a temporary suspension of debt service.

Our proposals for facing the debt stress

But as the reasons for the current debt stress are quite different from the big debt crisis of the 1980s, we believe that smart reforms can improve the situation:

We are convinced that a debt crisis can be avoided in Africa if all actors take the right decisions now.