Ethiopia’s investment promoters try to make it up

An Ethiopian delegation is touring through Germany for promoting foreign investment as Ethiopia falls behind due to political unrest, a burden of external debts and a tense currency situation. We met them.

The members of the business promotion delegation of the Ethiopian government try to make some good points as we meet today in a business hotel near Frankfurt airport. The head of the delegation points out that for the last 25 years the country had a very peaceful 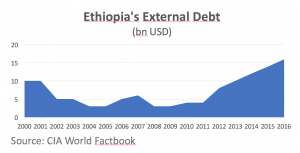 period even in a quite turbulent neighbourhood. And it is true that Ethiopia is facing political tensions in Somalia, South Sudan and northern Kenya. The Ethiopian official made all the way from Addis Ababa with a small delegation to Germany. For the next days, they will travel in southern Germany to meet as many companies as possible.

Their mission: to convince German entrepreneurs to invest in Ethiopia. Mission impossible? At least it will be a hard task. Ethiopia was a darling of the international community in the last years with annual growth rates of around 10%. But last year political protests, a hard reaction of the government and the declaration of a state of emergency raised questions about the political stability in the country.

The U.S. administration renewed on June 13 a travel warning for Ethiopia. According to the U.S. State Department, American citizens run in Ethiopia the risk of arbitrary detention – and the risk of being left alone in Ethiopian prisons. “The Government of Ethiopia routinely restricts or shuts down internet, cellular data, and phone services, impeding the U.S. Embassy’s ability to communicate with U.S. citizens in Ethiopia”, warns the U.S. government.

It is not only the political situation that worries foreign investors. It seems that Ethiopia financed its economic miracle too largely by debt. In the last years, Ethiopia piled up 16 billion USD external debt. A large portion of this, some 12 billion USD, is borrowed from multilateral institutions such as the African Development Bank and the World Bank. Bilateral creditors are owed about 4 billion USD. To make it even worse: This year, Ethiopia has to start to pay back Chinese dollar loans without having in the meanwhile built up an export industry that could earn the dollar revenues the country needs for paying back these dollar loans.

Nevertheless, the credit rating agency Fitch confirmed on June 8, Ethiopia’s “B” rating with a Stable Outlook. The comment however turned out quite harsh: “Ethiopia’s structural features remain a major credit weakness, with human and economic indicators ranking among the lowest of Fitch-rated sovereigns”, the report says. “External metrics are a rating weakness, with persistent high current account deficits (CAD), low international reserve coverage and a currency that is 20-40% over-valued according to IMF estimates”. Other economists worried before about the slowing of Ethiopia’s economy.

All these problems are known to the Ethiopian government, as the members of the delegation point out. The reply of the government is to push export industries and to attract foreign investors that want to manufacture in Ethiopia products for the export markets.

Therefore, the government is building ten industrial parks all over the country. The interest of foreign investors is high, according to the members of the delegation. They show a copy of the Ethiopian daily “Fortune” from June 28, 2017 reporting on the opening ceremony of the Hawassa Industrial Park aimed to become the flagship of these welcome centres for foreign investors. The Ethiopian government is keen to attract foreign investors that try to build in Ethiopia up production just for the export business, especially in the textile and garment sector, in the light manufacturing and agro-processing industry as well as in the pharmaceutical sector.

However, if the Ethiopian government makes it easier to bring foreign capital into the country, it remains difficult to get it out of Ethiopia. The Ethiopian subsidiaries of foreign investors are not allowed to open bank accounts abroad. All export revenues have to be paid into an Ethiopian bank account in the national currency birr. Foreign investors are even not allowed to open dollar or euro bank accounts in Ethiopia. 10% of the export revenues will be paid in a retention A account and will have to remain on this account. The other 90% will be paid in a retention B account from where it will be converted into Ethiopian birr within 28 days. If export companies want to buy spare parts in euros or dollars, the Ethiopian Central Bank will prioritize them. Manufacturers get foreign currencies within 20 days, says a member of the delegation.

The analysts of the credit rating agency Fitch fear that Ethiopia is going to run out of hard currency: “At a low level of two months of current account payments, reserves offer little protection should external liquidity dry up”, Fitch states in its latest rating note on Ethiopia. As long as the currency situation in Ethiopia is as uncertain as it is today, foreign investors should include the shortage of hard currencies in their considerations about an investment in Ethiopia. They risk to wait for a long time until they can get their money out of the country and some dividends back.